Pastoral & Music Staff
(click on the name to email)

Reverend Dr. Jonathan B. Hall has served as FCC's Senior Pastor since November 2017.  He was born and raised in Huntsville, Alabama and served as the Senior Pastor of First Christian Church in Ventura, CA for over seven years.  Dr. Hall holds a BA in Religion and Sociology/Anthropology from Transylvania University, a Masters of Divinity from Eden Theological Seminary, and a Doctorate of Ministry in Spiritual Formation from Claremont School of Theology, as well as a Certificate of Ecumenical Studies from Bossey Ecumenical Institute in Geneva, Switzerland.  For his doctoral project, he wrestled with his own story and the difference between privilege, blessing, and luck. You can find his sermons on the Sermon Page, and read more of his thoughts on his blog, Organic Spirituality.  In his free time, Jonathan likes to go to the water park with his family, mountain bike, hike, train for triathlons and adventure races, travel, play pickleball or racquetball, and read historical books with lots of footnotes. He races to raise money for our ministry partner, the Tennyson Center for Children. Currently, Jonathan is working on a book entitled “Letters to Our Sons” which helps fathers write letters to their sons. The topics of the book range from helping to break the glass ceiling, overcoming toxic masculinity, seeing color in a world that prefers black and white, the purpose of money, following Jesus, and much more. It will be published by Chalice Press in early 2022. Jonathan and his wife, Annie, have two boys, and a kitten named Bo Whiskers.  Jonathan serves on a variety of local nonprofit boards and helped to create an interfaith ministerial group in the Springs.  Within the larger church, he serves as the chair of the Transformation Committee for our church region, with the Excellence in Ministry Program, and many other organizations.  His favorite Bible verse is Micah 6:8.

Laura Hatler is FCC's Youth & Family Pastor. Laura has staff and program oversight for our children's educational ministries, the youth program, and oversees our staff Sunday School teachers. She has been a part of this faith community since she was an infant when her parents began attending the church in the 1970s. Laura has been volunteering with the youth ministry at FCC and in the region for 20 years. She has a BS in Psychology, from Phillips University and a Master of Science in Physical Therapy from the University of Colorado. When working as a Physical Therapist, she primarily worked with kids in the public school system. Laura is also an independent facilitator of Parenting the Love and Logic Way. She has a passion for working with youth and kids and their families, as well as building intergenerational connections throughout our church family. In her free time, Laura enjoys spending time with her husband Michael, son Caleb and their dogs, Lily and Zeus, singing, traveling, and flower gardening. Her favorite Bible passage is Philippians 4:4-9.​

​Kai Brown (they/them) Music Director and Lay Pastor of Mission and Innovation is a non-binary queer conductor, entertainer, comedian, and lover of life. Kai was born and raised in east Texas and has served congregations in the Denver Tech Center, central and east Texas.
Kai has over 10 years of music ministry experience throughout the United Methodist and Presbyterian Church (U.S.A.). While in Colorado, Kai has implemented, led, and maintained many missional outreach programs such as music intern, youth, and homeless outreach programs. Members of Kai’s choruses have performed at Lincoln Center in New York City, across Texas, and Colorado. Kai has also been the Artistic Director of Out Loud Colorado Springs Men’s Chorus since January 2017. Kai received their Master of Music in choral conducting from Texas State University and their Bachelor of Music in vocal music education from University of Texas at Tyler.  While in both graduate and undergraduate programs, Kai was active in musical theatre, opera, and choral activity. In their graduate program, they served as Assistant Conductor of the Texas State University Men’s Choir and Associate Conductor of the Texas State Chorale. Kai enjoys binging Netflix series, movies, the outdoors, time with Krueger (Kai’s dog), and trying new food(s). Kai’s favorite Bible passage is Romans 8: 35, 38-39. 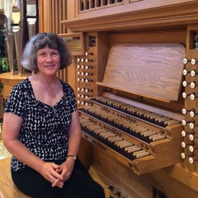 Carol Wilson, FCC's Organist, received her B.Mus. in organ & piano performance from Colorado State University in 1973, and her M.Mus. in organ & piano performance from the University of Kansas in 1989.  Carol has served First Christian Church as organist, accompanist and manager of the concert series since 1989. Prior to coming to Colorado Springs, Carol taught organ and piano and was university organist at Ottawa University in Ottawa, Kansas.  She has held positions as church organist and given organ and piano concerts in Texas, Colorado, Wyoming, Kansas and Missouri.  She studied organ with Robert Cavarra and James Higdon and piano with Wendell Diebel and James Winerock, and has played in masterclasses for many notable artists.  Carol is also an adjunct piano instructor at Colorado College, accompanies in the community, and is an active performer on organ, piano and harpsichord.  In addition to the Music Ministry, Carol is also part of the pastoral staff as Pastoral Visitor and is in charge of FCC's gardens.