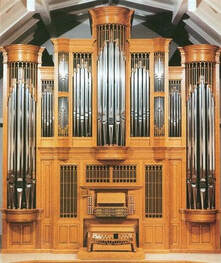 Back in the 80s, First Christian Church had dreamed of doing something about its aging organ, a 1935 Kimball that was buried in a chamber behind the front wall in the chancel.  Several organ committees had studied various options for rebuilding the instrument.  A generous bequest from Lindie Dean, a member of our congregation who loved music, made it possible for us to consider the creation of a new organ instead of rebuilding the old one.  Serious planning for the present instrument began early in 1992 with the formation of a new organ committee.  After much study and travel, Orgues Létourneau of Ste. Hyacinthe, Québec was chosen to build our organ.
The original concept for the organ was a two-manual instrument, due to the amount designated for the organ in the capital campaign.  Late in the organ planning process, the organ committee was faced with the task of choosing something special for the organ with the bequest of Arline MaKinney, a long-time choir member.  The decision was made to prepare the organ for the addition of a third manual division, creating the possibility for an even more versatile instrument.
The contract for the organ was signed in the summer of 1993, and con-struction of the organ began at the Létourneau workshop following the approval of the design and stoplist.  The old organ was removed after Easter of 1994, and was rebuilt, expanded and relocated to a small Methodist church in Delta, Colorado.  The wall was removed from the chancel, the choir loft was totally reconfigured, and the front edge of the chancel moved to be closer to the congregation.  The carpet in the sanctuary was removed and replaced with linoleum tile to improve the acoustics of the room.  The linoleum has since been replaced by ceramic tile, creating a space with a wonderful ambience for both worship services and musical presentations.
The process was completed with the installation of the organ in December of 1995.  The organ arrived in a huge semi-trailer totally packed with large crates of pipes and other organ ingredients.  Approximately 100 members of First Christian Church and the Men’s Bible Study Fellowship helped to carry the crates into the church and began the unpacking process.  The entire fellowship hall and sanctuary were covered with crates!  With the assistance of church members and their friends, the organ was assembled in record time, and was ready to play for Christmas eve services.
Over the years, we sold Christmas cards and cutlery, delivered phone books, and presented many concerts to raise the funds to complete the third manual division of this magnificent organ.  With the contributions from many individuals and a generous grant from the Kresge Foundation, we were able to complete the organ in the spring of 2000.
We have established a concert series to celebrate the presence of the organ in our community and to involve local music groups in presenting music to share with the community.  Check out the Concert Series link on the music page of our website, www.firstchristiancos.org, to see what’s coming up.  Come, bring a friend and enjoy a delightful variety of music.  If you are interested in bringing a group or organization to the church for a presentation on the organ, please call Carol Wilson at the church, 633-8888. 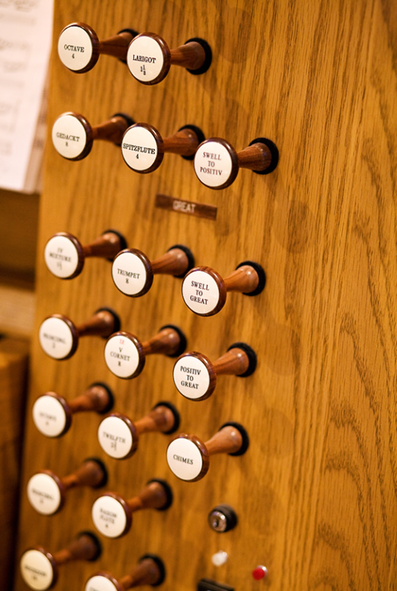 Orgues Létourneau was founded in 1979 at Saint-Hyacinthe, Québec, a town well known as a center of Canadian organ building.  As a young man, Fernand Létourneau worked for the older and more established company of Casavant Fréres and had the good fortune of learning the industry from the bottom up.  He worked there for 14 years, the last four years as head voicer.  After a study trip to Europe, where he learned a great deal about the old masters of organ building, he decided to form his own organ building company.  He was awarded the contract for Opus 1, a small instrument for a conservatory in Québec, soon after the founding of the company, followed by a contract for an 18-stop organ for a church in Epping, Australia.
As inquiries and contracts continued to come in, it was clear that permanent quarters for the organ building workshop were needed.  Their present facility is a former municipal water tank and pumping system with a 35-foot high erecting room.  This complex has allowed the growth the company has experienced in recent years.  They now have a dedicated staff of 25 full-time craftspersons.  The factory has complete pipe-making and wood cabinet-making departments with the ability to manufacture all organ components on site.  They even pour the metal for the pipes, and frequently have to manufacture the specialized tools required for pipe-making.
Fernand Létourneau's description of his concept of voicing is "eclectic, with a French accent."  His inspiration comes from historic European builders such as Schnitger, Clicquot and Cavaillé-Coll, but the sound is distinctly his own.  His philosophy is first to create an instrument that will accompany the worship service and choir, but will also do an excellent job of playing the solo organ repertoire.  In order to achieve that goal, he evenly balances the sound between the low, mid-range and treble, so that there are no extremes.  He also chooses the type of reed shallots to achieve the quality of sound and balance that he desires.  The reeds (with the exception of the pedal Posaune 16', which is German tapered) are Cavaillé-Coll style.  The flue pipes are a compromise between the French classic and German baroque voicing.  One of the challenges of building this organ was the effect of the altitude on the winding and voicing.  The organ required a stronger blower for adequate wind supply, and lower pipe cutups because of the lower density of air.
The pride that the craftspersons of Orgues Létourneau take in their workmanship is evident in every part of this instrument.  This organ has been built for the glory of God and will serve for generations to come.

We would like to express our appreciation for the bequests of Lindie Dean and Arline MaKinney, and for individuals in our congregation and community for the generous financial support that made this organ possible.  We would also like to thank the organ committee:  Alan Pollard, chairman, Betty Baker, Doris Farmer, Tom and Karen Hathaway, Diana Hatler, Arline MaKinney, Carol Milhollin, John Shumaker, Jeanette Walgren, Becky Whyley, Ed Wilson, Ex-officio:  Archie Coplen, Gay Hatler, Lynne Lane and Carol Wilson, for many hours of work and travel.  Thanks also go to Wes Wilson for the picture of the organ.
​